Celebrate St George's Day at home with your own dragon

Just as St George would not be beaten by a dragon, so Derby is refusing to let the COVID pandemic get the better of its annual St George’s Day celebrations this year. To keep everyone safe in line with current restrictions, all the quintessentially English frolics are happening online, with citizens called upon to play an active part from the comfort of their own homes.

Derby LIVE, Derby City Council’s arts and events arm, has teamed up with The Lost Boys and FOLK3D to create an online video experience which captures the spirit of the usual celebrations in all their tradition, colour and eccentricity – and your creations could be part of it. Details of our creative challenges are below. Find more information and details of how to submit before you make your video contribution. We've extended the submission deadline to Fri 16 Apr.

Two online experiences are being specially created to watch for St George’s Day itself, Fri 23 April. In the first, which is free to watch and available on demand for a week after, follow FOLK3D’s traditional clog dancer through the streets of Derby to the Market Place, with a dragon in tow.

Join the procession by making your own dragon at home, and sending video footage of it to Derby LIVE to include in the online parade. Follow FOLK3D’s online video tutorial to find out how to make your dragon from things you have lying around at home, and get the whole family to join in. 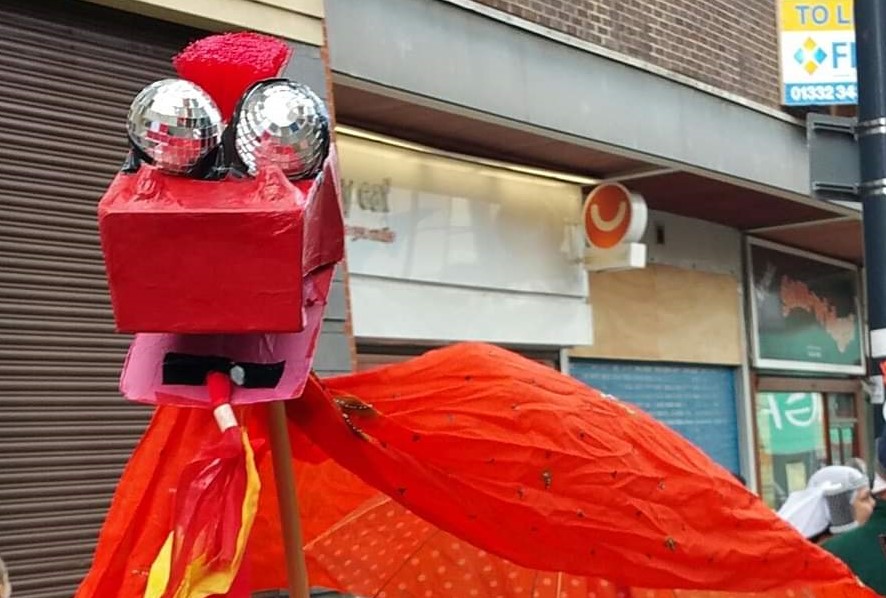 You could make a broom dragon like this one from a previous St George's Day parade! (Image: FOLK3D)

No St George’s Day celebrations would be complete without The Lost Boys’ performance of the dragon-slaying legend, which they are recreating on video this year in their own inimitable style. Paul Broesmith of The Lost Boys said:

“See that battle played out again, this time across Derby and into your own living room; courtesy of The Lost Boys, digital wizardry, and some questionable costume choices. If you like silent movies, if you like historically inaccurate depictions, if you like, awesome... you'll love this.”

Join in their performance by having a go at your own Mummers’ Play at home and sending in your footage to include in the main video. A Mummers' Play is a form of folk street theatre featuring members of the community in informal costume, performed on various holidays. Traditionally, two characters engage in combat, and the loser is revived by a doctor character.

FOLK3D have produced a Mummers’ Play instruction pack to get you started with costume and character ideas to join The Lost Boys in their video production. Sarah Matthews from FOLK3D said:

“One of the mummers’ play characters is Saint or King George. They are great fun, there is always room for improvisation, and costumes are often made from things around the home. We will help inspire and fire your imagination.”

If you don’t have the time to join in, why not just sit back and enjoy the festivities? Also featured on the free-to-watch video will be The Derby Dragon song, written in 2016 by the school children of Derby, performed by several local choirs. Soak in the harmonies and revisit some of the Derby Dragons presented in the Well Dressings of bygone years.

The Derbyshire Youth Folk Ensemble, supported by The Derbyshire Music Education Hub, will perform two hornpipes they have learnt and recorded especially for a Broom Dance spectacular, and there will be Morris Dance Jigs, a Sailor’s Hornpipe and Traditional Classical Indian Dance with an English twist. To watch the video, make sure you book your FREE tickets.

Hold your own online folk dance evening at home, via Zoom on Fri 23 Apr at 7pm for just £3.50 per household. FOLK3D’s Ceilidh features live musicians, easy instructions, and other dancers in their own homes to share the evening with.  A chance to show off your moves, have a laugh, or simply enjoy the music. It’s a lovely way to boost your wellbeing for the evening by sharing the St George’s Day celebrations. Tickets are available here.

“The creativity of Derby folk never ceases to impress me and this promises to capture the spirit of our usual gathering in the streets of the city centre, even though we can’t be together in person to celebrate this year.”