The Guildhall was built in 1828 as Derby's Town Hall. Following a fire in 1841, a state visit by Queen Victoria in 1891, and the infamous trial of Alice Wheeldon in 1917, it closed in 1949 with the opening of the new Council House on Corporation Street. The Council then converted the building into a theatre, opening in 1975.

Derby's largest entertainment venue, also home to a velodrome, opened in 2015. We manage the events programme, which has included the Derby LIVE pantomime, during the closure of the Assembly Rooms, as well as an exciting programme of comedy, music and sporting events.

Having previously operated as the Assembly Rooms & Guildhall Theatre, in February 2008 Derby LIVE was created, also encompassing Derby City Council's programme of major outdoor events and festivals. This programme included such long-established favourites as: The Darley Park Concert, the Markeaton Park Bonfire and Fireworks display, and the Christmas Lights Switch-On.  Since then, Derby LIVE has increased the portfolio of outdoor events and festivals which it produces and co-produces, including such annual highlights as Derby Festé and the St George’s Day celebrations. Derby LIVE also continues to support a wide range of events and festivals across the city produced by other leading partners such as the Caribbean Carnival, the Summer Beer Festival and The Big One @ Chaddesden Park. In 2010 a one-stop-shop was created for the animation of Derby’s city centre, including cultural activities, street trading, space hire and, at a later date, street café licensing. These activities, in turn, also came under the responsibility of Derby LIVE.

Between 2009-2012, whilst also managing the main-house of Derby Theatre (formerly Derby Playhouse) in a unique partnership with the University of Derby, Derby LIVE held the lead responsibility in the city for professionally-produced, home-grown theatre. Highlights of this period included Onassis starring Robert Lindsay which transferred to the West End, Peter Ireson’s winning of the TMA Theatre Manager of the Year Award in 2010, and The Go-Between, winner of the 2012 TMA Award for Best Musical and which also transferred to the West End.  In total, during this period, Derby LIVE delivered 34 new productions, 18 of which were world premieres, across a range of venues including Derby Theatre, the Guildhall Theatre, the Assembly Rooms' Darwin, Cathedral Green and site-specific work. Derby LIVE also provided the highest quality, cradle-to-grave, participatory theatre learning and performance opportunities through its Playmakers programme (for 5 – 9 year olds), its Youth Theatre (9 – 19 year olds), and its Community Theatre (over 16s). 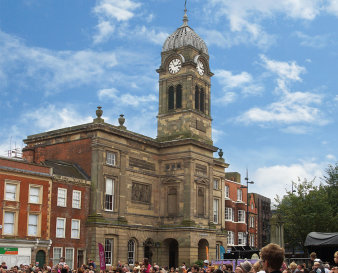 All you need to know about our venues and their facilities 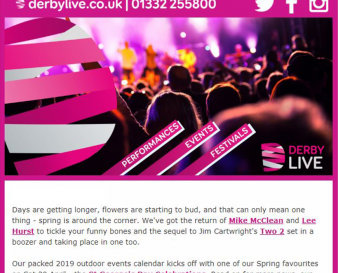 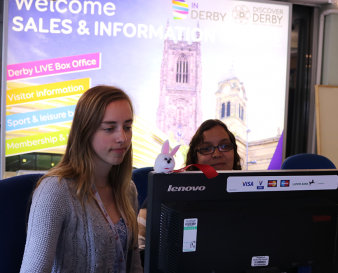 It's easy to get in touch with us and we'd love to hear from you.