To celebrate their 50th Anniversary, The Watson Players are delighted to present their 2020 family pantomime Snow White and the Seven Dwarfs.

Let’s take a trip down memory lane back to where The Watson Players first began.

In the heart of Derby’s West End in Watson Street there was a Baptist Church where an important part of the Church's calendar was the Sunday School Anniversary. Part of these celebrations took the form of a concert to entertain relatives and friends. Members of the church used to organise this yearly event, mainly singing, recitations and comedy sketches. The concerts always included the Primary aged children doing their piece, well-rehearsed by Miss Nellie Ratcliffe, who later became President of The Watson Players.

The Watson Players have presented pantomimes across Derby from St. Anne's Church Hall, Mickleover Methodist Youth and Community Centre, Mickleover School (now Murray Park), Bemrose School and, in 1980, they moved to our very own Guildhall Theatre.

The first play that was presented was "Sailor Beware" in November 1974 at the old Playhouse Studio Theatre in Sacheveral Street. Nowadays the summer production is usually staged at The Guildhall Theatre but plays have also been performed at the present Derby Playhouse Studio Theatre, Mickleover Methodist Youth and Community Centre and, in the open air in Markeaton Park!

In the early days the players thought an audience of 300 for their pantomimes was wonderful - recent pantomimes have played to over 2,100 people!

To celebrate The Watson Players’ fantastic achievement, they are delighted to present their 2020 family pantomime! Snow White and the Seven Dwarfs is the traditional pantomime story of good and evil. The wicked Queen is very much annoyed that she is not the fairest of them all thus getting rid of Snow White is necessary. However, the Queen has not counted on Snow White’s friends; the Seven Dwarfs! Oh and an exchange Dwarf from Kings Landing?

Just some of the hard work that goes into a show

The panto process starts a year in advance when the Director and Script are chosen by the Watson Players committee.  The production team is announced and a read through of the script, singing and dancing and character auditions took place in July 2019.

The storage unit at Melbourne, called ‘The Barn’ stores costumes and is used for building and painting their own scenery.

Rehearsals are now in full swing and Christmas is a very busy period with up to two rehearsals a week (Tuesdays and Thursdays) at rehearsals rooms at Spondon Methodist Hall.

During the lead up to Christmas, members and ‘friends’ of the Society are invited (currently 70 Members and 25 ‘Friends’) to Spondon for songs from the panto, carols and a festive evening.

Then after Christmas it’s all go – scripts are down, songs and dances all learnt and its all hands on deck to get all costumes fitted, scenery finalised and props produced.

Publicity is a big part of the Watsons - follow them on Facebook. Taking publicity photos and liaising with the local media and local publications all takes time, but is necessary in order to build awareness and sell tickets.

The Watsons are a great community to be part of.  Since childhood I’ve been helping with painting (as much as a small child can) and I’m thrilled to finally be old enough to be part of the cast, especially as it is the 50th Anniversary.  It’s been lovely to watch the society grow and grow alongside it. Tabitha Hartshorn – Acting Member of the Watson Players 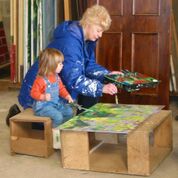 In recognition of the major contribution Patricia Hartshorn made during her time with the Watsons, there is a Patricia Hartshorn Outstanding Achievement Award presented each year to a worthy recipient, usually nominated by the members.

Quotes from The Watson Players members

As a member of the Watson Players for over 30 years I am delighted and honoured to be the Producer of our 50th anniversary production of a pantomime. The Watson Players have provided a high standard of family entertainment to Derby audiences over the years and Snow White and the Seven Dwarfs is proving to be no exception. A pantomime not to be missed. Angela Swift (Committee Member) – Director of Snow White & the Seven Dwarfs

A 50th Anniversary is a great achievement for any society but when it is the Society you belong to it is something to really celebrate. I have belonged to The Watson Players for over forty seven years, it is a huge part of my life, I was elected President in 2003, and a position I still hold and am proud to do so. I no longer perform on stage now however I Prompt for our Plays and Pantomimes, a job I enjoy very much, still making me feel part of all our performances.   Fay Hinchcliffe – President of the Watson Players (pictured below accepting Exceptional Contribution to Amateur Theatre Eagle Award this year. 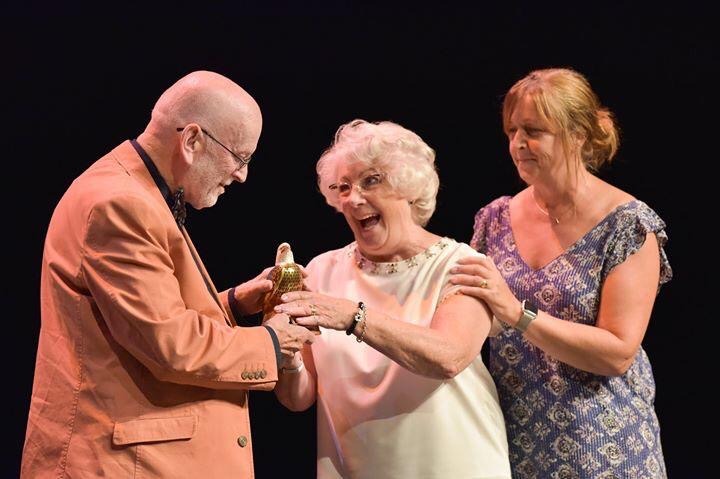 As one of only two founder members of The Watson Players still active in the society (Jenni Padley being the other) it is with great pride that I am able to take part in this production. I have witnessed our growth from very humble beginnings to the position in which we find ourselves today as one of Derby’s leading amateur theatre groups. The intervening fifty years has shown my age since I have shrunk from a 19 year old Man Friday in our first production into a 69 year old dwarf in our fiftieth!!   Trevor Chambers – Vice President of the Watson Players

It was because I knew Trevor Chambers and he said “you have a good singing voice we could do with you” that I joined the Watson Players in October 1973. Aladdin was the Panto at St Ann’s Church near Whitecross Street Derby.  I was Wishee Washee. In 1979 I started working on stage crew and really enjoyed helping to build the scenery for both pantomimes and plays - interspersed with a few returns to the stage playing Man Friday, Buttons, and Wishee Washee again.

I took over stage managing, together with Brian Hartshorn, in 2000 - we became known as Laurel and Hardy. Not sure whether it was our waistlines or the comedy moments we had! I think our most difficult but effective set was as the revolving set for the play, Noises Off. We have also been awarded an Eagle Award for Outstanding Achievement when we created a working fountain for the finale of Snow White & Seven Dwarfs in 2004.

I have made lifelong friends at The Watson’s and still enjoy going to build the sets at our scenery store, as it’s a bit warmer than where we used to be in Melbourne, so we don’t have to defrost the paint before we use it!   John Woolley (Honorary Member) Stage Manager for Snow White & the Seven Dwarfs

I consider it to be an honour to be Chair of such a thriving and vibrant society as the Watson Player’s, especially as we enter our 50th year.  It is a magnificent achievement and one that we can rightly be proud of.  Our challenge now is to carry on the good work, so that upcoming generations can both be part of or entertained by the Watson Players in the future. Aidan Repton – Chair of the Watson Players

Snow White’s not the only one to take a bite of the apple! We’ve taken a bite off our prices!

Offer available till 20 Jan 2020 when you book online here.